Second summer rally in the Finnish rally championship. This time in Kouvola and on very fast and challenging roads. Adding some spice to the normal entry list were WRC Academy driver Elfyn Evans from UK and Nil Solans from Spain. It was interesting to see their pace in among the regular runners.

There had been some rain before the recce, but luckily the weather stayed cloudy during the recce and rally. On Friday after the recce we had one super special stage on Kouvola rallycross track. 1 kilometre long sprint didn't much raise the heart beat. We lost 1,8 seconds which was quite a lot on such a short stage. Didn't really matter sine we still had 90km of stages to go, but it's always better to win time on a super special than to loose. If you loose time you have to fight those seconds back in the forests between the trees.

On Saturday every stage were to be run twice. We started with the longest one of them all. 16,75km should wake up everyone. We drove with our usual pace and managed to be the fastest in our class driving the same time with Jukka Korhonen. A bit of a surprise really since we didn't push it or take any risks. 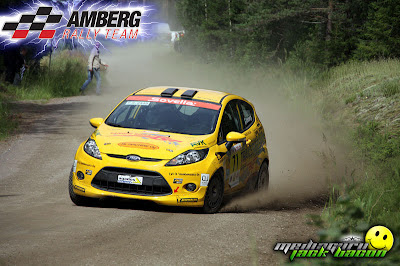 The next stage was where all the action was during the rally. I created some for us by being late with one note and we half spun losing about 5 seconds. That was minor compared to some of our R2 competitors. There was a big jump on the stage where Jukka Korhonen and Juho Annala crashed their cars heavily. Here is a youtube clip of the place Kouvola special stage 3 jump and here is Jukka's in-car clip Jukka Korhonen jump and crash Jukka and his co-driver Mikael were OK and can fix their car for Neste Rally Finland, but unfortunately Juho and his co-driver Tuukka were taken to hospital, because of Juho's back pains. His season is over, but luckily nothing permanent and he should be back on the stages 2013 with his C2. 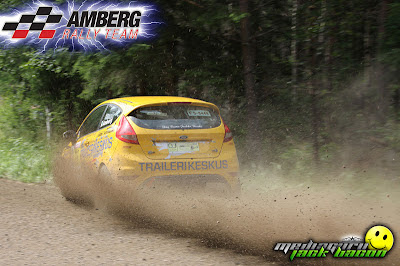 After the third stage we only knew that Jukka and Juho had crashed, but since the online results didn't work too well we kept on driving with the normal pace the following two stages before the service. On the fourth we even had a small "moment" when cutting a left hand corner a small cliff lifted our car on two wheels. After service we found out that we were leading before Elfyn Evans who had driven very well considering his fiesta had WRC Academy settings. I chatted some time with Elfyn and his co-driver and asked how they liked the rally. Our lead was quite comfortable, but we kept the normal pace on the stages that were now run for the second time. We only lifted a little bit on the last one. First ever class victory really made us smile. Only niggle was that three fiestas were taken to technical inspection for 45minutes before we even got to the podium. Minor nuisance for mechanics before victory celebrations.

So much for Kouvola. Now the focus is on Neste Oil Rally Finland planning recce/rally schedules, eating schedules, fuel calculations, checking technical regulations etc. First time for me in a WRC event and something I have dreamed of all my life. Hopefully we'll be fast and make it to the finish.

Matti Heikkinen
A 32 year old Finn. Controller during office hours and a rally co-driver after that.