As a spectator in Heinola F-Cup 10th of September 2011

The F-Cup is Finland's most popular rally series. Usually F-Cup rallies have between 170 and 220 cars participating. No recce allowed so the crews drive without pace notes. Of course it helps if you have a good road memory since many of the stages have been driven during the previous year in F-Cup or in some other rallies. The rally in Heinola was the last for this season in F-Cup and Jere Rekola won it by a mere 1,5 seconds with his MB 190. A worthy winner since Jere has been close to winning the championship several times. 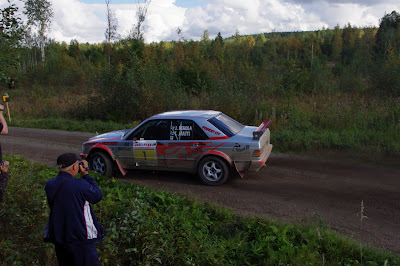 There are still several mk2 escorts used in F-Cup. The escorts usually have been through lots of modifications in all areas and engines with a power output of between 170-230bhp. 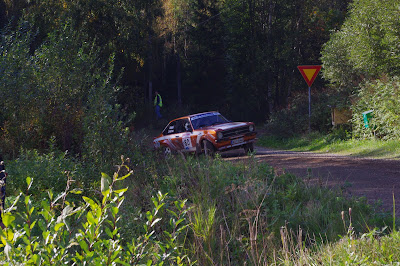 That was one day spend in watching rallying and waiting for the next to get back to the action myself.
Lähettänyt Matti Heikkinen klo 9.42 Ei kommentteja:

Training weekend in Myrskylä and Huittinen

In the rally training we get to spend 6 weekends in different parts of Finland driving, co-driving and getting feedback from the coaches. During the 4th and 5th of September I had one of these weekends with the other drivers and co-drivers in the program. We started the weekend in Myrskylä in something we in Finland call a club race. Everyone in the training program gathered to Myrskylä at 8am on Saturday morning. Only 40 cars are allowed to participate and there was one stage which was 4 kilometers long. So a very suitable event for testing and training. The atmosphere was very relaxed even though the weather greeted us with some occasional showers. I spent the weekend co-driving for Andreas Amberg with whom I´ll participate in the last Finnish championship rally (Kerava SM-ralli) on the 16th of September. Personally I think Honda Civic is a nice car to use in rallying. I prefer rally cars to make some noise. Hondas are well known for rev happy engines and a type-r with 230hp and a rally exhaust really does make some enjoyable "screaming" when on attack mode. 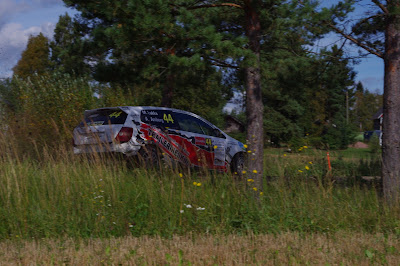 Saturday afternoon we moved to a hotel in Forssa from where we had one hour drive to Sunday's test stage at Huittinen. On Saturday evening we got some feedback from the coaches, went through Sunday's program and relaxed the Finnish way by going to a sauna.

Sunday morning started the usual way in our training weekends. Morning run at 6am! Rally drivers are after all athletes and a bit of jogging in the morning helps to wake up before you go to breakfast. Personally I don't mind the early wake up since my dogs wake me up at 5.50am every morning anyway. Sunday was a better day what comes to the weather so one didn't have escape the rain showers anymore. And definitely much better than the -30 Celsius temperatures we had in training during January. Nothing special during the day. People in the training team know each other well already so just the usual stuff. Focusing on your performance, checking other people's times, going over in-car footage, speculating this and that related to rallying. 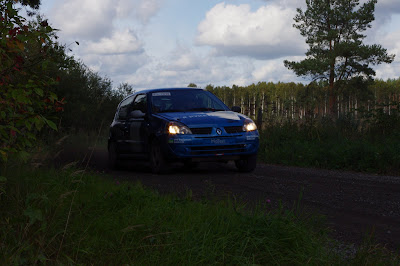 The youngster in our group V-P Karttunen received his driving license only a couple of days earlier and was warming up his wrists before his first ever rally on the next weekend. Since everyone in Finland drives their first rallies without any recce allowed (so called dark rallies) the rest of the training team seems to be going to the rally as spectators to see rally cars and check how V-P performs with his Renault Clio. If your not practicing or driving yourself then the natural way to spend a free weekend is to go and watch others drive. My girlfriend loves the logic behind this way of thinking...

August 27th 2011. First time for me to get to be in a 00 crew. First time in any of the zeros. I have to admit that I really liked the experience. I got an enjoyable day in a rally car without the usual nervous waiting to get to the first stage. With the 00 car you can drive good rally speed in some places and avoid taking any risks. Of course primary mission of the safety car is to check that the stages a safe for spectators and competitors. Being a safety car is a task where the organizer regards your crew as one who can be trusted to do this with certain amount of experience from rallying.The day started with a breakfast with the driver in Imatra's Valtionhotelli. A beautiful old place next to a deep ravine. From there me and the driver Juha Huttunen headed collecting the route maps and time schedules for safety car crews.

Before the stages we participated in a meeting for the safety cars. There it was explained for everybody what is expected from them and what kind of things to keep an eye on. The briefing was very useful for a first timer like me. The start of the rally was in the middle of the town on a walking street. The nice location and beautiful weather enabled people to have a close look at the rally cars and ask questions from the crews queuing for the start. Everybody I talked to liked the location which enabled normal people to learn more about rally sport.

From the centre of Imatra we headed towards the first stage which was a narrow, but fast road. After the stage I had to unlearn something compared to a normal rally. One mustn't follow the time card, but the schedule given to the safety cars. I was planning on going too early to the time control in the beginning of the second stage. The second stage was a really fast stage and there we even got to entertain the crowds a bit. The day was quite hot so the brakes on our fwd Opel Kadett started to overheat which caused us to navigate through one corner unusually sideways. Third stage was also quite fast stage. Nothing out of normal except  one jump where there was a bunch of spectators with a sign "more throttle!". I found that quite funny. Spectators don't usually bother doing something like that in Finland.

Since the rally was only three stages long our day ended early. After our duties as safety cars the organizer wanted feed back from all the safety car crews if there was anything they could improve the following years. We couldn't really find anything to complain and the weather had been nice and warm so all in all a good day. my first time in a zero car, but hopefully not the last.
Lähettänyt Matti Heikkinen klo 9.51 Ei kommentteja:

Matti Heikkinen
A 32 year old Finn. Controller during office hours and a rally co-driver after that.